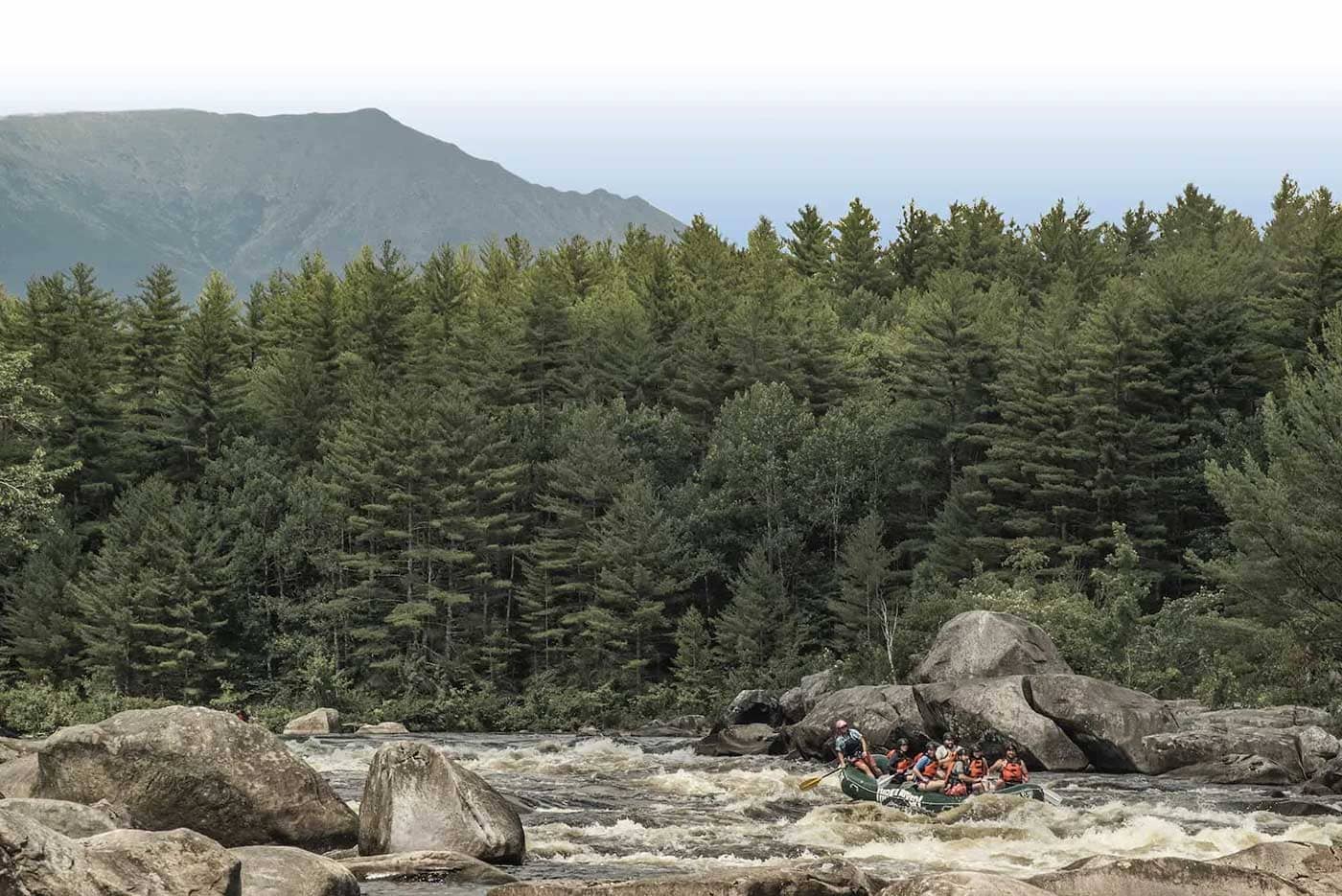 Utilizing a river’s current to transport sawn tree trunks downstream to sawmills or pulp mills. The last log drive in North America occurred on the Kennebec River in the Fall of 1976. 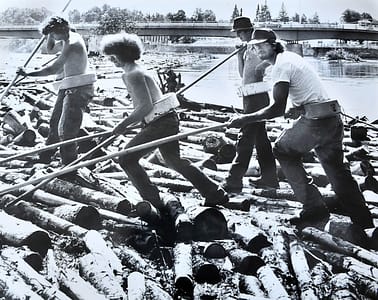 Maine’s rich logging history was forged in the spirit of colonization. The old world utilized methods thought to be practical and efficient and helped to develop housing and infrastructure as well as supplant the state of Maine as one of North America’s top lumber producers around the world. Now, Maine is an iconic outdoor destination bursting with recreational activities for locals and visitors alike. Take a whitewater rafting trip down the Kennebec, Dead, or Penobscot rivers you will be able to see how and why the log drive came to be. Instead, Maine’s rivers are an untouched paradise with exciting whitewater rapids, lounge-worthy lakes, beautiful scenery, and rich wildlife.

Finding lumber in 2021 is as easy as heading to your local hardware store and loading it up to build whatever you please. It may not be as cheap as years prior, but the method of production has been modernized ten-fold. There is robust online and transportation infrastructure in place that allows for easy shipping of lumber products directly to your door. As you can imagine, this was not always the case. Throughout history, the means of manufacturing lumber for building materials has evolved to be convenient, efficient, and accounts for a large percentage of local and national economies.

Log drives were a very practical and effective way to move large amounts of material without the liberty of modern machinery. As far back as the 16th Century, Swedish log-floaters could relocate lumber from rural forests to water-powered sawmills and pulp mills. The logs could then be cut, measured, and delivered to population-dense areas. This method was known to the Swedes as “timmerflottning” and swiftly became the status-quo in European logging industries and later migrated to North America.

In Maine, lumber industries accounted for a huge $9.8 billion portion of the Pine State’s earnings in 2014. The value of such dense forests was realized before Maine gained its statehood in 1820. 200 years earlier, English settlers floated timber from Patten to Bangor, 100 miles down the Penobscot River, helping the city become the top lumber exporter in the world at the time.

It seems like a no-brainer if you have a torrent of deep water from winter snowmelt and thousands of tons of trees to move. The work to actually make this happen was inherently dangerous. When logs would jam the river, lumberjacks would place bundles of dynamite to burst the clogged Penobscot and Kennebec causing damage to their product, the river, and the surrounding forests. Structures were built known as “sluice gates” to purposefully create blockages or swiftly ramp trees into the river. This allowed lumberjacks and floaters the ability to control how much timber would float downstream. Occasionally, huge amounts of wood ended up floating freely in Maine’s lakes. To resolve this, lumber companies employed steamboats to round up the trapped lumber and pull it to a sluice gate across the lake. What seemed to be a natural way to move lumber downstream became an archaic, dangerous, and greed-driven venture.

Besides the dangers of log drives, the environmental consequences of 200 years of log driving had vast negative impacts on Maine’s river ecosystems. Trees would shed their bark during the long downstream journey which created an imbalance in the oxygen and nitrogen levels in the river. This greatly affected the local fish populations and the water quality of the rivers. But just two years after log drives were federally banned the river quickly returned to its original condition. The last log drive in North America occurred on the Kennebec River on November 15th, 1976. The end of the log drive era paved the way for a new kind of industry, recreational boaters began making their way back to the Kennebec and Penobscot rivers. Whitewater rafting outfitters became a popular method for tourists and outdoor enthusiasts to get back into nature and onto the river.

When the era of log driving ended, a huge interest in recreational river sports boomed in Maine. Whitewater rafting outfitters started popping up all along Route 201 in northern Maine with the goal of filling the gap that log-driving left behind. Now, 45 years after log drives have been federally banned, the rivers are full of whitewater rafts and wide-eyed visitors. Whitewater rafting may not be as intensive as moving tons of logs downriver, but the experience is as unforgettable as it is challenging. With a new industry comes new challenges for safety, technology, and sustainability. Resident river guides in Maine have been guiding the Kennebec, Dead, and Penobscot Rivers since the 1970s. Over the years, more and more safety guidelines have been implemented and guide training is a serious and comprehensive endeavor for those with the will and passion to take visitors through Maine’s incredible rivers. The rafts themselves have even received many upgrades over time, the material has gotten stronger and the designs are more apt to deal with unpredictable whitewater. PFD’s (Personal floatation devices) have evolved to cope with whitewater rapids and have become much safer and more comfortable over the years. To this day, whitewater rafting still remains an exhilarating, fun, and sustainable activity that will always be around as long as whitewater is.

Trending
Where to Eat in The Forks, Maine
BOOK NOW